Recently I was lucky to work again with Bristol-based makeup artist Jo Peters, a makeup lecturer at City of Bristol college and something on an online celebrity with a hugely popular YouTube channel. Our model for the shoot was Jess who was keen to try out an idea I’d had making use of lots and lots of butterflies.

Jo, who’s also know as Joanna Delilah online, is brilliant with theatrical makeup styles and it was great fun to be involved with something quite high concept. I last worked directly with Jo sometime ago on a shoot with burlesque performer Keda Breeze, but Jo’s also put me in touch with several of her makeup students, who have all proven fab to work with.

Before the shoot I’d used Pinterest to collate some great visual ideas to communicate with the rest of the team. Everything. took place at my Bristol flat in a very small space but if you work within limitations you can produce high-end images anywhere and don’t always need a grand location or vast studio.

It was also an opportunity for me to test a new piece of equipment, the Bowens Luminair OctaBank 140, which is a large 8-side softbox. Working in a tight space I didn’t use an additional fill light but assistant, Sophie, was sometimes on hand with a large silver reflector panel to help control shadows. Mounted to one of my Bowens Gemini 500 studio lights, the Luminar Octabank is such a cool light there’s not much need to over-egg the pudding. I was able to squeeze in a background support stand and we shoot against Rose Pink seamless paper, a fairly rich magenta colour, from Calumet.

I’d obtained a large number of feather butterflies from a floristry wholesaler for the shoot in shades of bright magenta and lilacs. There were relatively detailed and looked even better on camera and were relatively economical to buy in bulk. To attache them to Jess’s underwear and skin we used some hypoallergenic body tape.

Jo was able to integrate the colour scheme suggested my the butterflies into her makeup scheme, which took well over an house to apply to out model before hair was styled by assistant, Sophie, who is one of Jo’s students. Joe was clearly enjoying going to town on the project as work commitments had meant she hadn’t had the chance to work on something this fun for a while. Jo integrated some simple but clever touches like using paper on Jess’s eyelashes. The finished look melded perfectly with the butterflies and we were ready to shoot.

My Canon EOS 24-70mm f/2.8L tens to be my go-to lens when using studio flash, which use used for most of the images, although I did switch briefly to a 70-200mm lens for some tighter headshots. The Luminair Octabank was a delight to use if a little unwieldy in out tight shooting space. Still I could have been happier with how the images turned out. 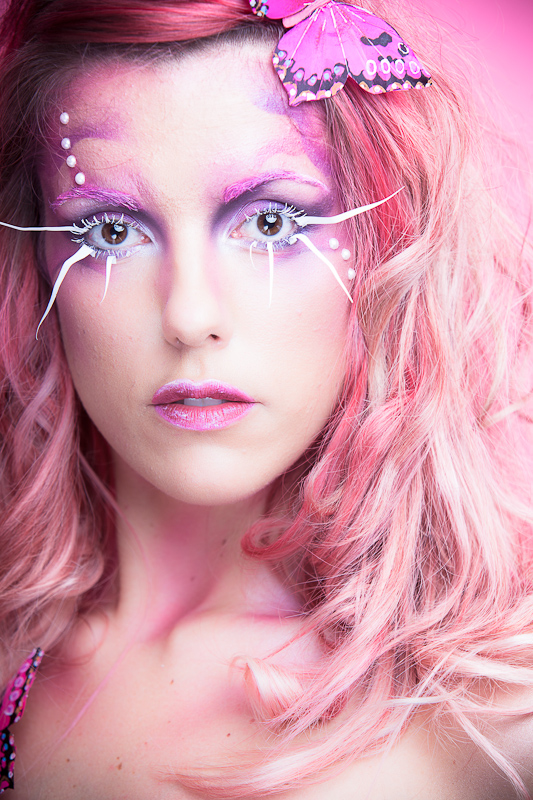 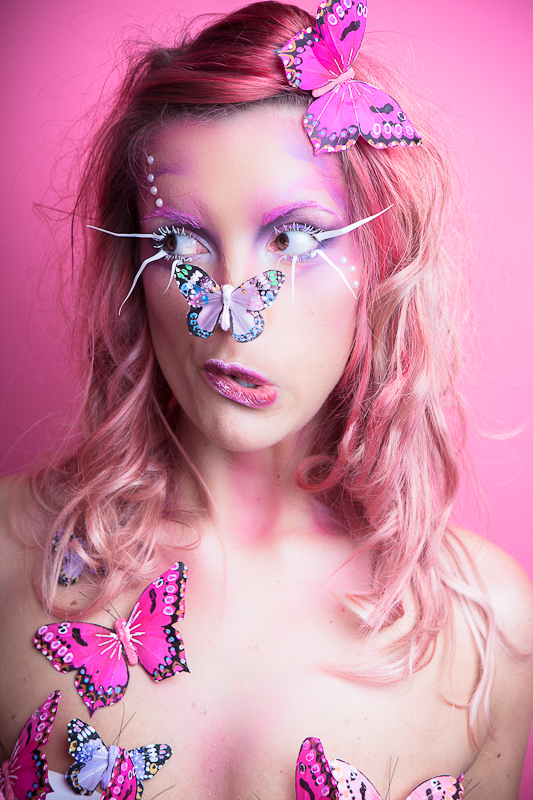 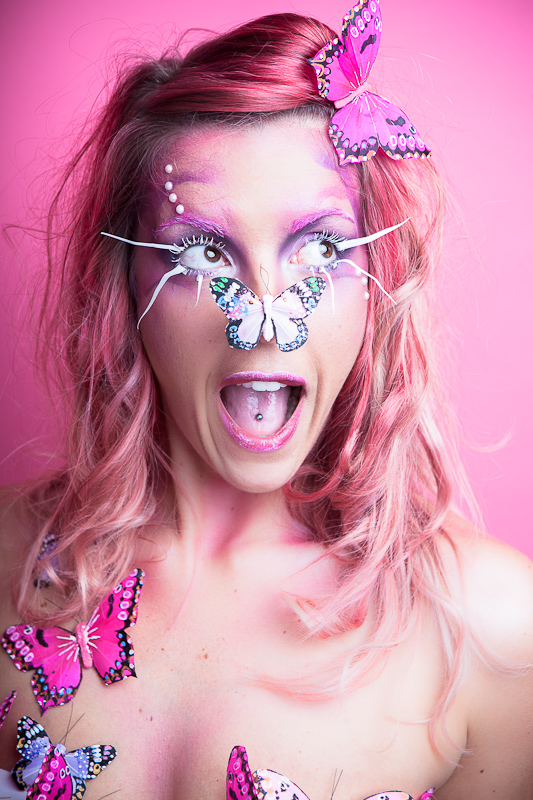 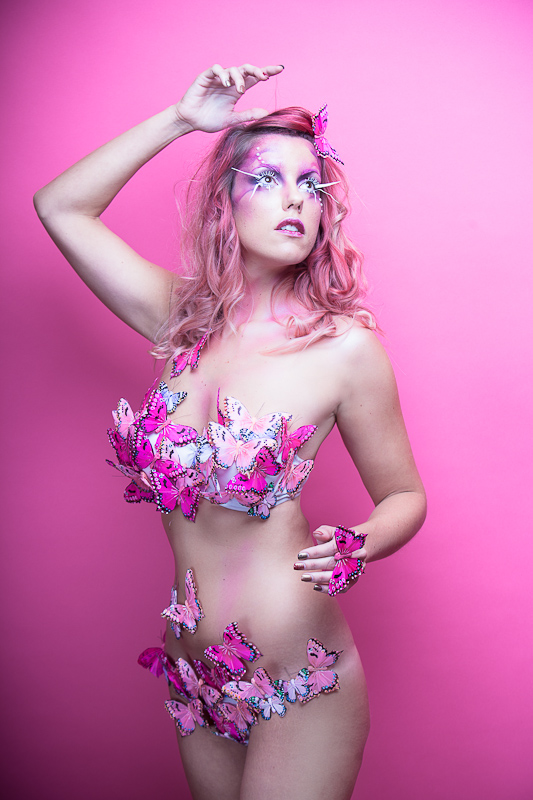 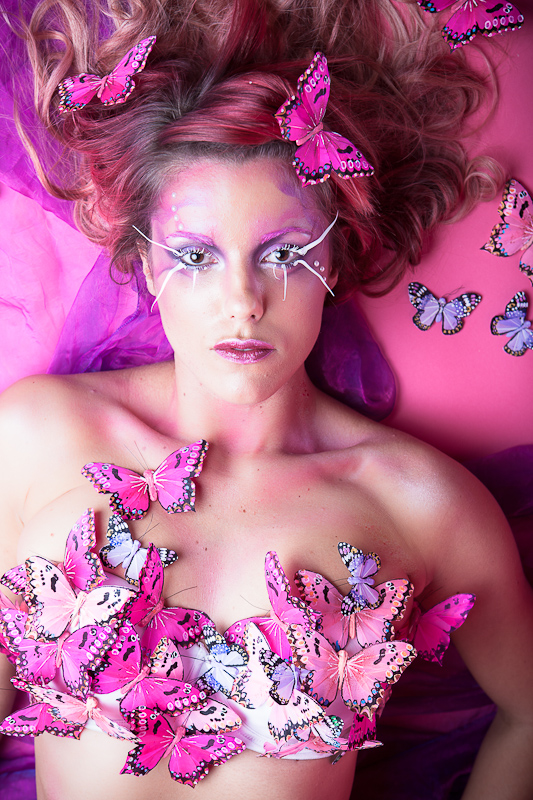 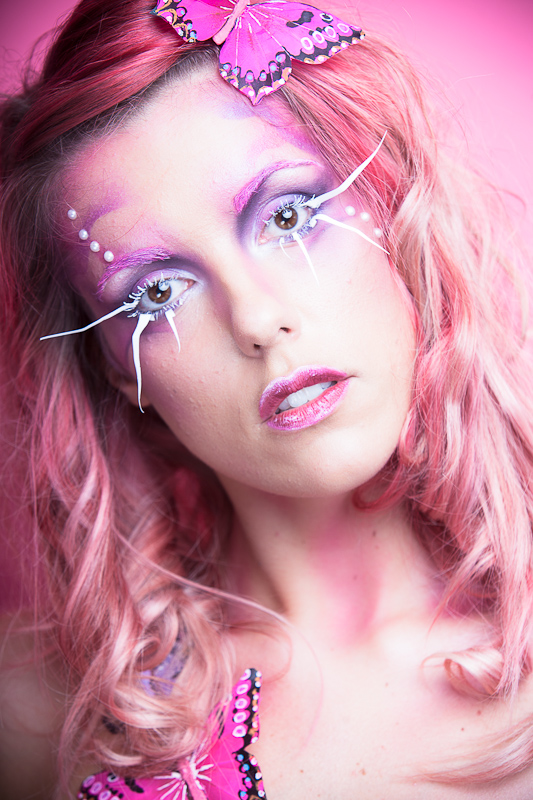